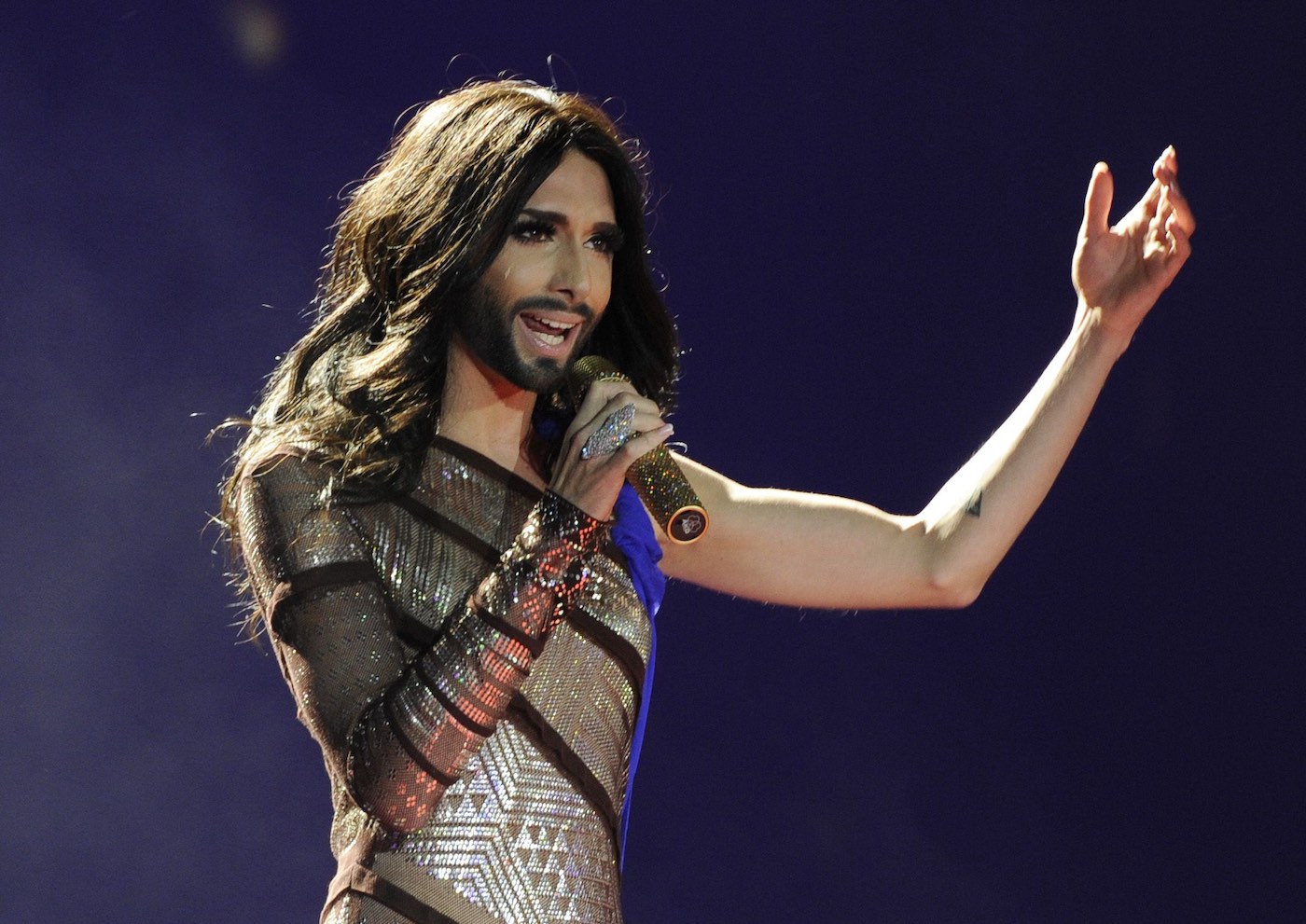 Conchita says “It’s not about appearances; it’s about the human being. Everybody should live their lifes however they want, as long as nobody else gets hurt or is restricted in their own way of life.” She ain't half wrong.
Photo: AFP Photo


So, this year Austria is being represented at Eurovision by Conchita Wurst. She failed to represent Austria in 2012, but she’s back with a big song – and a fair bit of controversy. As one of the first artists selected for this year's show, Conchita got a few people a bit annoyed. Because Conchita has a beard. Some people have found her a bit difficult to handle, because of the whole... drag thing. As if Eurovision can't handle a drag queen. 'Rise Like A Phoenix' brings Bond realness to Denmark and smashes it. My twelve points are firmly with Austria and this wonderful display of brilliance.

A character of hope, of heart and of honesty

Created by Tom Neuwirth, Conchita is his “drag persona” – his character. But she is so much more than that. She is a singer, a model, an artist – a statement. But some people don’t quite like Conchita – because she has a beard. But never mind, she'll be at the Eurovision Song Contest this year, in force.

On Conchita’s website you’ll find a deeply warming statement. Tom’s character in Conchita came about after years of discrimination Tom had faced as a teenager. She was therefore his statement for tolerance and acceptance. They now, they say, are a team just ‘working in sync’ – two people, two individuals. But Conchita has a beard, so you know, she’s weird. Some people found Conchita’s message of tolerance and respect too much to handle – and rather quickly created a petition, trying to stop her getting to Copenhagen. 31,000 people liked a Facebook page against her. Because – well, she has a beard.

Others took to the internet writing sexist, homophobic, vile, bullying and damn right disrespectful comments on websites, on her videos, on YouTube. On the Eurovision Song Contest website. What on earth could someone have done to deserve that, when their message is ‘be who you want’? As I said, they have a beard.

When Austria announced Conchita would be their entry in Copenhagen – someone wrote “She??? It´s a man. 0 points.” – well that’s 12 points for normal then… whatever that is. When Conchita released her video for her (amazing) entry ‘Rise Like A Phoenix’ someone wrote; “What a freak??? did they find him in the psychological hospital? want to throw up on him!” That’ll be nil points I assume? When the Austrian entry was added to the Eurovision YouTube feed someone decided to comment underneath with; “There’s nothing attractive in this human being. Open your eyes guys, just open it and you’ll see that its not normal.” That’s another 12 points for normal, and not for beards.

In 2012 under a video of Conchita performing ‘That’s What I Am’ (which got to number 12 in the Austrian charts) someone went for “dont really know how to call this creature – Does this creature have penis?” Fine with beards – but even more-so with penises it seems. 12 points for a penis?

Another went for this inspiring message of tolerance; “Burn yourself please? (that mutated thing in the video)” – that one garnered 23 likes. 24 sets of 12 points for normal.

Yet someone felt so upset about Conchita having a beard that they needed to explain that they felt “ashamed to be Austrian”, adding “that’s some sick shit”. Clearly not a beard fan. Lastly – another joined the Austrian patriotism and was also horrified by Conchita’s beard that they wrote; “I love Austria, but this… I can’t understand it. Can’t accept it.” Another said “Kill it with fire!” adding “and then he/she/it wouldnt be a fucking tranny” – yep “fucking tranny”.

I mean. Because someone has a beard they get this thrown at them? Because they’re not “normal”?

People get this thrown at them everyday whether they are famous or not. Not because they have a beard – because they are seen as ‘different’, ‘not normal’, ‘fucking tranny’s’ – and it’s vile sickening and wrong. Homophobia doesn’t go away just because we have the right to get married nowadays and just for the record – Russia doesn’t have a monopoly on homophobes. Because for most people it doesn’t end with them being on stage in front of 115 million people in Copenhagen. It ends up with them still being bullied, feeling alone, different and alienated. Conchita was created out of these feelings. The lyrics are not just some cheap shot lines put together – they are a message, an expression of hope and a statement of intent.

Conchita’s message is “It’s not about appearances; it’s about the human being. Everybody should live their lifes however they want, as long as nobody else gets hurt or is restricted in their own way of life.” So don’t “close your eyes” and say it’s just the music that counts. Don’t be embarrassed, don’t believe that somehow Conchita brands you as something you aren’t. Open your eyes, look at this incredible artist and get some respect. And in Copenhagen don’t see Conchita as a joke. She’s a talent, a rolemodel. A star.

I know who’ll be getting my 12 points.

Go on Conchita – because you’re brilliant.