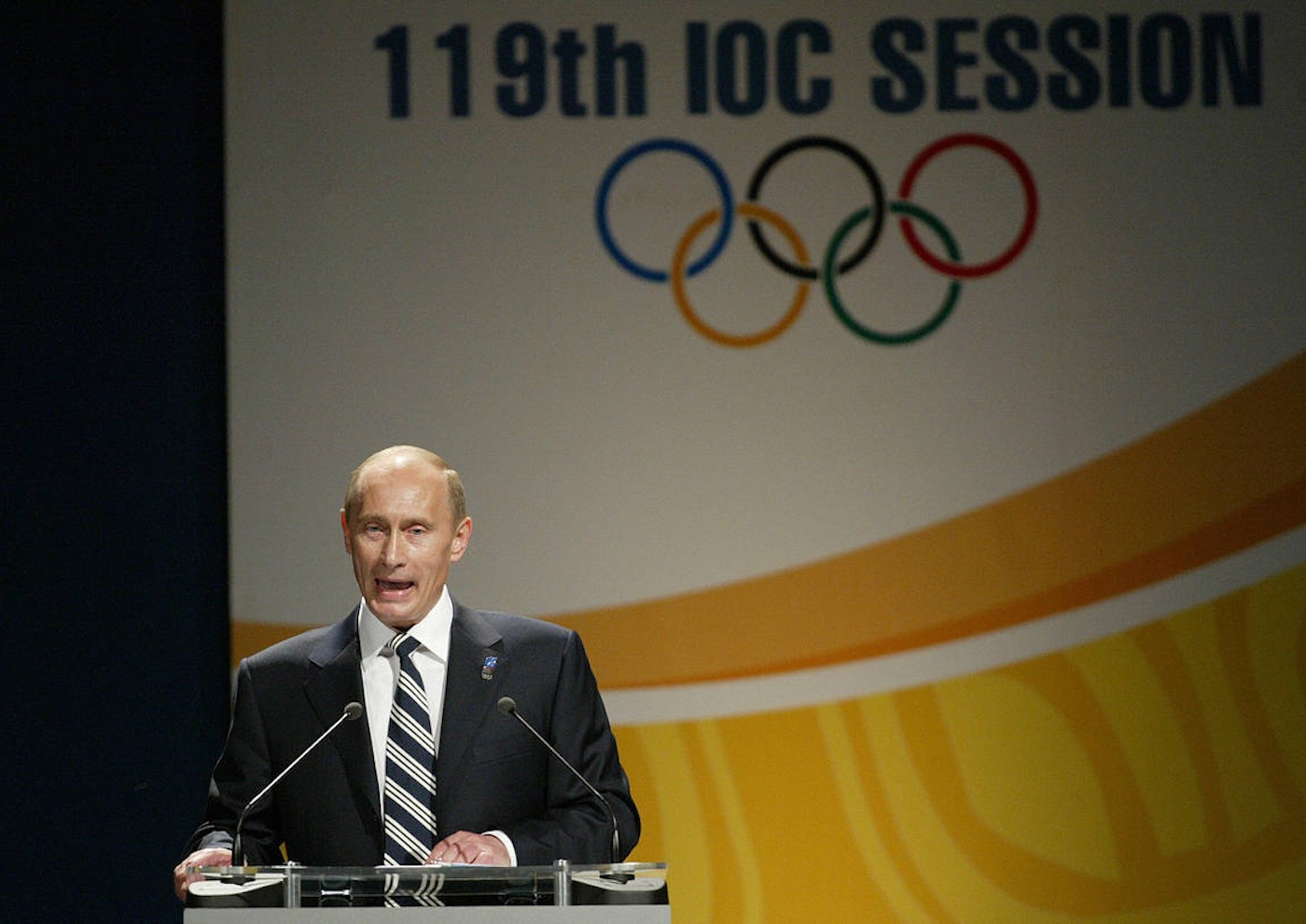 Vladimir Putin's speech in English at the 2007 IOC Session took Sochi over the line to become the host of the 2014 Olympic Winter Games.
Photo: The Wall Street Journal


South Korea’s PyeongChang has found itself in another tough battle to host the Winter Olympics. Having been beaten by Sochi four years ago, and Vancouver before that, the Korean's could well find themselves beaten by Merkel’s Germany tomorrow - after a brutal assault from their Japanese neighbours who announced their own bid for the 2020 Summer Games just as the Korean's were on the home straight.

And the games are awarded to the city of...

Four years ago I sat down to watch a race unfold that would end in pictures of grown adults crying being beamed around the world, as the Russian city of Sochi basked in the glory of breaking South Korean hearts.

Inheriting the title from Vancouver, the Russian team, headed by President Putin, had come from behind to pull off a victory that many never suspected.

Crushing the hopes of the city of PyeongChang for the second time – having lost out to Canada four years previously - it was the race for the 2014 games which left a long shadow.

But taking the message of ‘third time lucky’ quite literally, South Korea is back this year for another go.

Not humiliated enough after missing out on the 2010 games by three votes, nor the 2014 games by four, the South Koreans at least have shown some conviction to the International Olympic Committee in bidding for the Winter Olympics for a third straight time - a feat that perhaps only be rivalled by their Turkish and Swedish colleagues.

For their first few attempts, the PyeongChang bidding teams have focused on rhetoric that wouldn’t go a miss in a fantasy story.

Give us the games, they said, and they would guarantee stability and peace in the Korean peninsular.

They’d already constructed many of the venues, and they are no strangers to Olympic organisation – having hosted the Summer Games in their capital in 1988.

But this pitch came up short against the Russian's and Canadians that said 'it's our time'.

That is now however a message that the Korean team can deliver safely in Durban tomorrow.

It's a pitch that says it can open up the games to new markets - and it's a whole lot more tangible than peace.

But is it enough?

Korea has a fight on its hands to host the games

Thinking they might have earned the support of their fellow Olympic nations by now, the Korean's must have been devastated to see themselves lined up against another fearless bidder.

Sure, they could have taken out a re-emerging Salzburg or Sion bid in the first round - and they could probably have eaten France’s Annecy for breakfast.

Putting Berlin and Hamburg summer bids on the back-burner, the German’s announced that their host of the 1972 Summer Games, Munich, would return in an attempt to capture the Winter Games in 2018.

Not only contempt with perhaps crushing the hearts of the entire Korean nation, they would also pick up history in the making - with Munich becoming the first city to host both the Winter and Summer games.

And Munich has come out fighting, despite domestic upsets, and there is no certainty that PyeongChang will now come out on top tomorrow.

Germany is running on its credibility to deliver, and something that has defined the winter games in the last few years - real snow.

Whilst any bid can be hard to predict - history could point to disaster for Korea tomorrow.

Sweden took a similar three tries at hosting the Winter Games in 1994, 1998 and the ill-fated 2002 bidding war respectively.

It lost every one. Losing out to Lillehammer, Nagano and Salt Lake City.

A saving grace may be that Munich has already signalled an interest in 2022 if it is unsuccessful - opening the door to a future run.

But the main issue for Korea isn't necessarily its rival - but instead, its neighbour.

For weeks, the Japanese have hinted at a possible Tokyo try for the 2020 games following their loss to Rio in the 2016 race.

Perhaps in an attempt to steal PyeongChang’s thunder, and ensure it is not ruled out by default, Tokyo has all but practically joined Rome and Madrid in the 2020 race - citing ‘inspiration’ and ‘dreams’ to overcome the recent tsunami and earthquake disaster.

With Delhi wavering after an exercise in damage limitation with the 2010 Commonwealth Games and a middle-eastern bid consigned to failure after the IOC refused to put Doha on the shortlist for 2016 despite scoring higher than eventual winner Rio on the evaluation, Tokyo could be lining itself up as the main rival to Paris, Rome or Madrid.

If the idea of Tokyo 2020 does indeed catch the eye of the IOC, they could be tempted to pour cold water on PyeongChang tomorrow – in an effort to keep the door open for the Japanese in four years time.

Back to back European Winter Games are less of a concern for the IOC than back to back Summer/Winter games in Asia. More European nations have shown an interest, and there are sensible reasons for hosting a games in either France or Germany – where a strong commercial case and full seats makes a compelling case.

Korea's ‘New Horizons’ could therefore present an open door for Munich to portray the Korean bid as a big risk for the IOC in a time of austerity.

With the successful hosting of the World Cup in 2006, Berlin’s impressive athletic championships and now the Women’s World Cup Germany is tried and tested. It has impressed and delivered.

More so, Asia is hardly new to the Olympic Games - with Japan hosting the Winter Games previously, and South Korea also having hosted the Summer Games.

Tomorrow therefore, the IOC will not only award the rights to host the 2018 Games but it could too give a strong indication of where it wants to see the 2020 Olympics.

With its own pacific neighbours potentially raining on its parade for 2018, could the best chance for Korea to host the games be in 2020?

Busan has a strong record on hosting sport, and could match up well against Tokyo.

It would take nerve, and potentially another crushing defeat - but two things are certain tomorrow:

2018 is PyeongChang’s to lose and Angela Merkel is no Vladimir Putin.