If you don't laugh, you'd cry 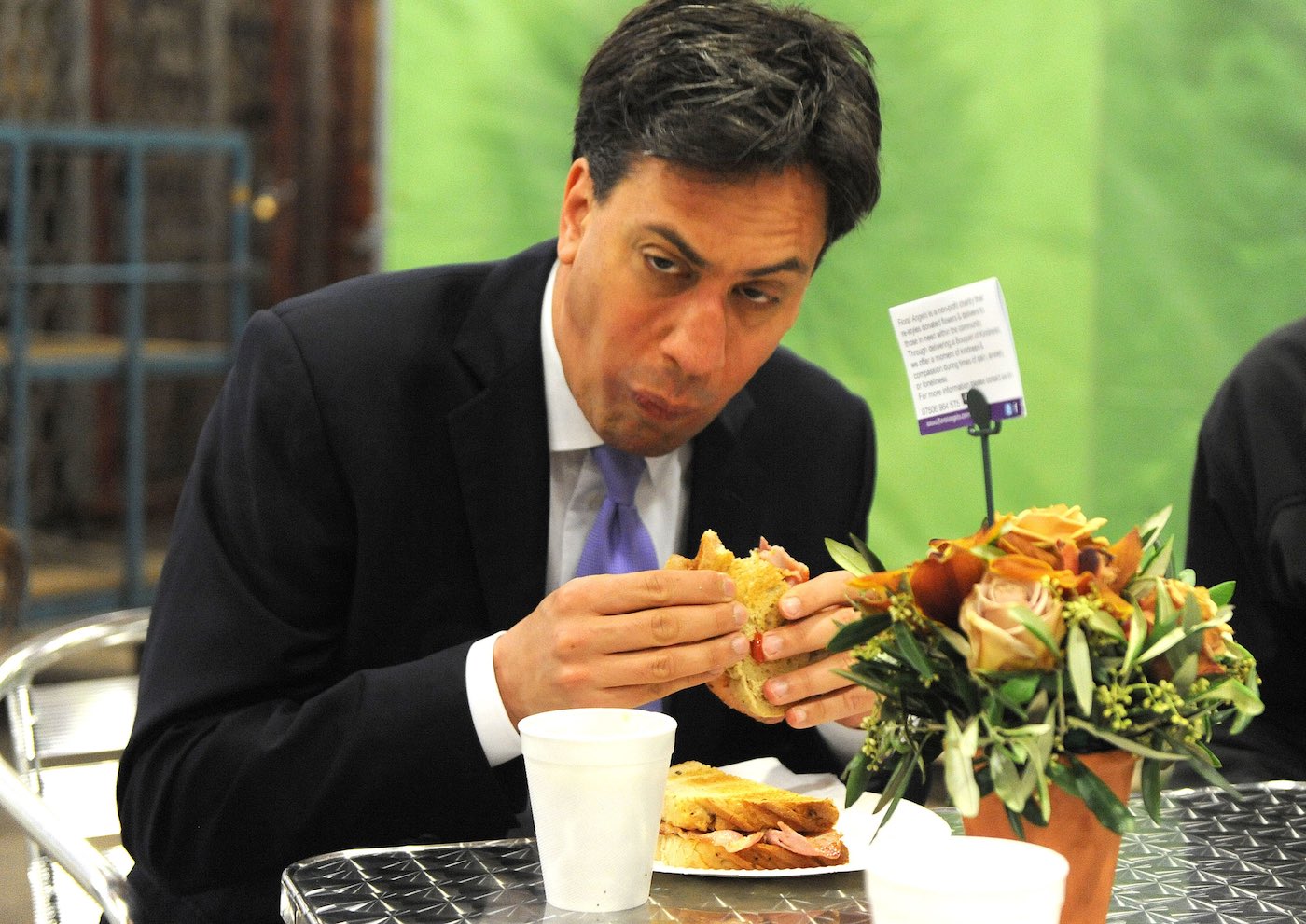 The problem for Labour isn't the fact Ed Miliband can't eat a bacon sandwich, it's that it came to define everything about Ed in 30 seconds
Photo: Eyevine/Redux


Labour wants to be for the squeezed middle, but it's coming across as a middle class nightmare. At the heart of its problem is its leader - Ed Miliband, a man who in recent weeks has made a bacon sandwich his arch nemesis and earlier today turned his multi-million pound background into a sob story worthy of an X Factor crowning. He used to talk about moving beyond the politics of now, but today he is incapable of moving beyond yesterday's headlines.

I stood at the back of the room and laughed

In a room off Oxford Street at the Royal Institute of British Architects, surrounded by people in slightly ill-fitting suits, some sitting awkwardly on a stage and gazed up by TV cameras - Ed Miliband, the man who in ten months time could be the Prime Minister of the United Kingdom, explained and exclaimed how he, despite the odds, should be this country's next leader.

This is a privileged guy who has been at the top of politics for something like 20 years - and here he is having to defend the idea that he can lead the country.

A who wants to go around the world and make it a better place and yet here he is, admitting that he can’t eat a bacon sandwich without looking weird.

And you have to laugh.

Because on one side of the room is the media feeding the same bubble as the spin doctors and strategists on the other.

The woman who stands up on the stage with her arms held up high like some sort of church preacher trying to get people to join in.

She’s flapping her arms like she’s about to take off.

Is she from the party?

I don’t know. But she looks ridiculous.

It all looks ridiculous –

So you laugh, because otherwise you’d cry.

Out of 2956 words spoken this afternoon, just 343 of them about the international crisis unfolding in Gaza.

And then roughly twenty five minutes talking about why not being able to eat a bacon sandwich properly shouldn’t discount you from being Prime Minister.

A quick intro on foreign affairs and then the rest "confronting his critics".

Ed said; “If you want the politician from central casting, it’s just not me, it’s the other guy.”

But I have to stop you there, Ed. Really?

Because I’m not sure you really do look all that different from David Cameron, or Nick Clegg.

I’m not sure why any of you really are all that much of a change or somehow different.

Because to be honest, isn't half the problem that all three party leaders sound exactly the same, look the same and, to some extent, say the same thing?

Because that’s what people have been saying to me for the past six years.

Of course I’ve always wanted Ed to stand up and say that politics can be, should be and must be more than the celebrity focused soundbite culture that it is today.

But I honestly don’t think Ed is some kind of martyr for his speech.

How brave to get up there and point out that British politics is completely and utterly failing at keeping people interested, engaged or involved.

Worse, Ed somehow decides to turn the Oxford degree educated, special advisor, son of a Marxist professor cliche into some kind of X Factor style sob-story and make himself out to be some sort of ground-breaking new model of politics and leadership.

Ed, and his team, decided not to say how ludicrous that is, but instead made it seem like some kind of legitimate story.

The party wants to be for the squeezed middle, but is coming across more middle class nightmare

Getting people past the idea that Ed talks a bit ‘weirdly’ is not the challenge British politics faces.

And he referenced it briefly – all but for a second.

Newly appointed Cabinet ministers, women, judged for what they wear down Downing Street.

Apparently Sajid Javid’s appointment as Culture Secretary is only ‘tokenistic’.

In fact, a disabled MP can’t even give a speech from the Dispatch Box. Are they ‘too disabled’ to be Prime Minister?

What about the kid who’s a bit camp – are they ‘too gay’ to be Prime Minister?

What about a trans Member of Parliament , would they be 'not quite PM material’?

This isn’t about having different ‘qualities’ of leadership as Miliband said today.

This has to be about ripping up the book.

Because if we’re now saying a guy who’s a white, middle-aged, straight man can’t be our PM, then can someone please tell me who can be?

We risk going around for another 15 years debating whether you have to ‘look right’ to be Prime Minister;

Where our politics will be as vacuous as it has been for too long, and our politicians will carry on being inward looking and boring – quite frankly, just pretty piss poor at what they’re meant to do – which isn't just running the country, but leading our country.

And we’ll be left with no one actually tackling the problems we face or bringing us together.

We’ll end up with Philip Hammond running our country.

We are at a turning point and if we don’t get it right it will not be easy to turn back.

Now, people don’t much like politicians. They don’t trust them, their party or the promises they make.

But this doesn’t just get fixed with words.

Ed’s solution? “If politics is going to respond to the distrust people feel, it has to start by talking about the things that matter to you.”

And that's exactly the problem.

I don’t think talking about freezing house bills is going to fix the problems in the energy market.

I don’t think pledging to ‘repeal’ a bill, whatever that even means, is going to solve the crisis the NHS faces.

I don’t think single issue campaigns are going to turn people out in their droves to vote.

I don’t think any of these things are helping to restore trust - because people don’t trust politicians to stick to their promises.

He called it “The Politics of Now”.

He said that the ‘Politics of Now’ appealed to people’s self-interest and was about “meeting immediate needs and improving people’s lives in ways which markets alone will not do.”

But back then Ed thought the ‘politics of now’ was shallow.

That we need to move beyond such a politics -

I agree with Ed, well, the old Ed at least.

We need to move beyond the shallow politics of now more than ever - because the challenges we face are bigger than they have ever been and not simply fixed by motivating people to vote on self-interest;

Sexism, the future of politics, climate change, care and pensions – the economy.

And yet, unfortunately, today’s prescription from Ed is another dose of the status quo.

Getting beyond the politics of now is possible, but not like this

Ed says that he doesn’t like photo ops, but that he’ll try his best at them, if that’s what people want.

Ed says people rate consistency and see who you’re willing to stand up to as a marker for trust and leadership. That's the same Ed Miliband of course that in the same speech offered a grovelling apology for a photo opportunity in Rupert Murdoch’s The Sun newspaper, after he had stood up to them?

Ed said that cynicism was the problem we faced.

Well I apologise if I’m being cynical – but I don’t think some comforting words about Ed’s adversity over those who pull him down because of a bacon sandwich is going to change politics for the better.

I don’t think people should be happy that a load of MPs that they, the electorate, apparently ‘kicked out’ in 2010 will return in 10 months time to be as lazy as they were last time just because the Lib Dem vote has collapsed in swing marginals.

I don’t think we should be happy that we can’t hold MPs to account until 2020 on the promises they make in 2015.

I don’t think that we should be okay with the fact that millions of people don’t vote, can’t vote or won’t vote.

We have to do things differently.

And of course it’s not about bacon sandwiches, but neither is it about watching a lecture from a former professor of Harvard talk about not being able to eat one properly as some sort of injustice.

Tell me now the Labour Party is interested in talking beyond the politics of now and I’ll cut my cynicism.

But we have a ballooning national debt.

International crises across the world.

An electorate totally disinterested in the politicians that we hope will take a stand and a lead to tackle these enormous challenges we face.

But quite frankly we’re more interested in calling Ed 'the future' - the man who stood up to Murdoch; the man who redefined leadership.

And if we’re not, well then we’re saying that his brother – who looks like him, sounds like him and practically had the same policies as him – would have been all those things instead.

Oxford can clearly only get you so far.