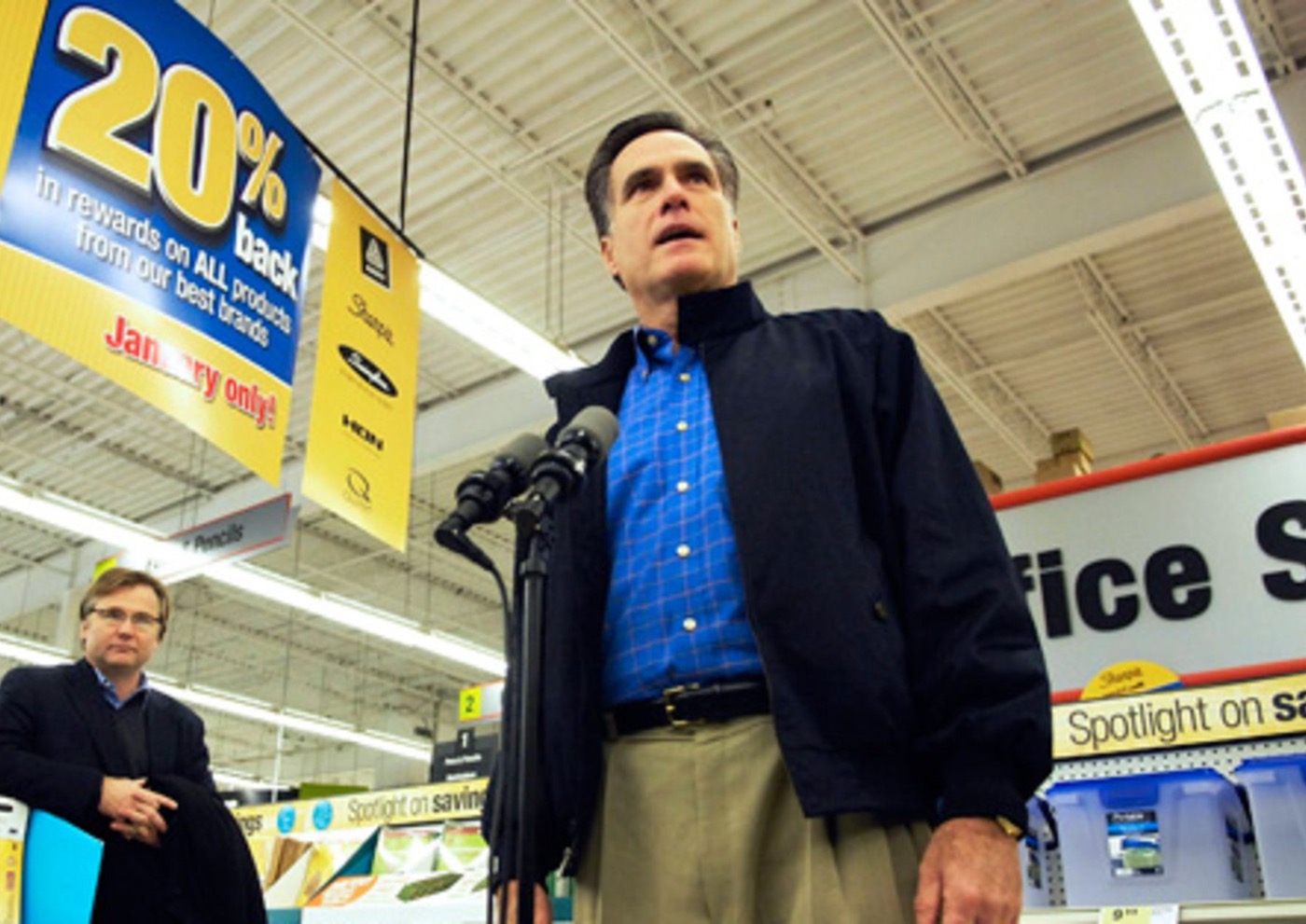 Romney in a Staples store, a company he was part of building. Whilst the Governor may have fallen short in 2012, don't rule out someone going the full way in the future
Photo: Reuters


He may have lost to one of the best known politicians for a generation, but Mitt Romney racked up sixty million votes in the process. The politics that defined that election remain ever present, and not just on the other side of the Atlantic. We remain deeply divided, and just as we’re told we hate rich people, we carry on voting for them. Whatever the speculation over his own future - and I’m not sure I believe for a second that in two years time we’ll be saying the words ‘President-elect’ before the name of former Massachusetts Governor - but whether in America or here in Britain, I wouldn't rule out Mitt Romney's message going the whole way next time.

With Romney at the helm, the GOP had something more to say

Much of Romney’s political fortune these days is less to do with the money in his wallet and more to do with the fact that if history was to serve us up a Republican nominee in 2016, Rick Santorum should be the most likely next standard bearer; a man who reminds us just how lucky we were to have Romney in 2012.

For Santorum believes gay relationships are equal to that of someone having one with a dog.

He calls Mormonism a cult, yet wants to relive the crusades.

And, yes, wants to 'promote' marriage to women and girls "as a way out of poverty".

For these reasons alone should the Grand Old Party look again at dear Mitt, perhaps we should for once consider that they have found some sense and reason.

If the choice is between men who all earned money off the back of years in politics or the media, then whilst Romney’s story may not not sound too dissimilar, at least his career in business gives him something to distinguish himself.

And if the Democrats can choose a multi-millionaire to go up against George Bush in 2004 and defend it, then perhaps if the post-Bush Republican Party was to move away from the entitlement that political families have held over the White House, all whilst the Democrats look towards it in Hillary Clinton, then perhaps there are less obstacles to Romney ending up President than first thought.

But - here's the catch. Romney is a loser.

He changed his positions again and again, and he ran away from statements he’d made in the past.

Rather than feeling authentic, he tried to cover his ass as opposed to owning up when he was caught out.

And despite being a presidential candidate who looked more like a president from a movie makers dreams than any other, he ultimately wound up coming second to a more genuine and more maverick John McCain who didn’t shy away from singing offensive songs about bombing Iran to then do it all again four years later.

But whether it was because of his slightly dated image, his gaffes or the scare factor about his party, he lost, and probably lost for the last time.

And yet, there's something to learn about both times he tried to become President of the United States.

There was one thing Mitt Romney was consistent about, other than losing.

Romney ran as half politician, half businessman

When challenged on his wealth and when criticised for his actions – Romney unleashed a passionate defence of what he defines as 'free enterprise'.

At times his campaign stretched it to the limit, taking quotes out of context and bashing his opponent as the man who wanted to bring America to its knees, nationalise private companies, take away peoples self-made wealth and define Obama as a man who didn’t understand the American economy that secured people jobs and gave people security.

It was when Romney was arguably at his most genuine - probably because he had lived it and spoke from his own experience.

Try and say the same for any other frontline politician today on either end of the spectrum.

You’re not spoilt for choice.

It’s with that in mind that Romney would be spinning in his electoral grave should he be following political events over here in the UK.

Ed Miliband this weekend turned his ‘vested interests’ campaign towards Sports Direct – a company he said “has stores on many high streets where many people shop” aka a company that employs around 20,000 people and one of Britain’s best known retail brands.

For Miliband, his attack on Sports Direct is designed to make him a man of the working people struggling to get by.

Yet for Romney, an almost identical company was at the heart of his defence of American prosperity for working people.

Sports Authority – a company employing almost the same amount of people today, in around the same number of stores, in the same way - was Romney and America’s success story; jobs, an economic turnaround, American entrepreneurism and wealth.

Sports Authority? A champion of American success and jobs creation.

Now look, Sports Direct would not be my chosen model of business - and I’m not holding it up as a pillar of exemplary behaviour and defending its worst excesses; nobody should be at risk of losing work if they’re not ready to jump immediately to an employer’s demands whilst on a zero hours contract.

But Ed’s attack reads like he’s heard about it in a briefing paper.

Whilst Romney spoke from the heart.

Because Miliband talks about zero hours contracts in the same way that Len McCluskey talks about the self-employed. ‘Look at these people over here on these things without understanding what they’re doing, we really must do something about that – these poor people.’

But the rest of the public are so bored of having lectures from people who seemingly seem so distant from the experiences of real life.

You can say we’re “not anti-business” until you’re blue in the face, but the fact is nobody is going to buy it when it feels like you have nothing positive to say about business at all.

If you believe that business and entrepreneurship is the preserve of an elite, and the values that business espouses don’t have a relevance to how people want to get on, get up and get by then you're missing something pretty serious - which could be fatal.

Just like Cameron, Osborne, Boris, and Balls, Miliband doesn’t seem to have done a day’s work out of politics - yet has a small fortune to his name.

And people are just pissed off with it.

Mitt Romney isn't all that, but when people are pissed off with politicians, his recipe could sell - big

It’s true that my generation feels robbed by the fact we can’t buy a house and it’s unlikely we’ll have a retirement - certainly by the standards of today.

But the economy and the world is changing.

I really don’t think Mitt Romney is all that, and I don’t think he wants to talk about what happens when people reach for the stars and don’t quite get there – he is not a progressive.

But right now my party, and some in the Democrats, don’t sound like they even want people to try and get there.

It’s exactly these feelings out there in real life Britain that Nigel Farage is leeching off.

People feeling let down and lectured to by a political class made rich off the back of a career in politics, media and lobbying.

They don’t get your crowing about media bias – because you used to work there yourself.

They don’t believe you when you say you’re going to make things better for ‘ordinary’ people unlike that millionaire David Cameron - because you’re a millionaire yourself.

They don’t see why you’re lecturing them on hard work and think saying you understand businesses is enough – because you’ve never worked in one let alone even started one.

When Barack Obama uttered the words “If you’ve got a business – you didn’t build that. Somebody else made that happen.”

That was the moment that fired up a Republican Party not all that excited about Mitt Romney.

It made it seem like the President didn’t understand how people felt about politicians and their sense of entitlement.

It gave Romney an opening and authenticity to talk about his own experiences, a life that he’d led outside of politics - running the Olympics, building businesses.

But by god did he start mobilising a much broader base than some would have you believe.

And it wasn't just hedge-fund managers.

If the entitlement of two political dynasties fighting over the presidency is just round the corner,

Then I wouldn't rule out Romney, or at least his message - 'anti politics' - winning the day.