Talking about my generation 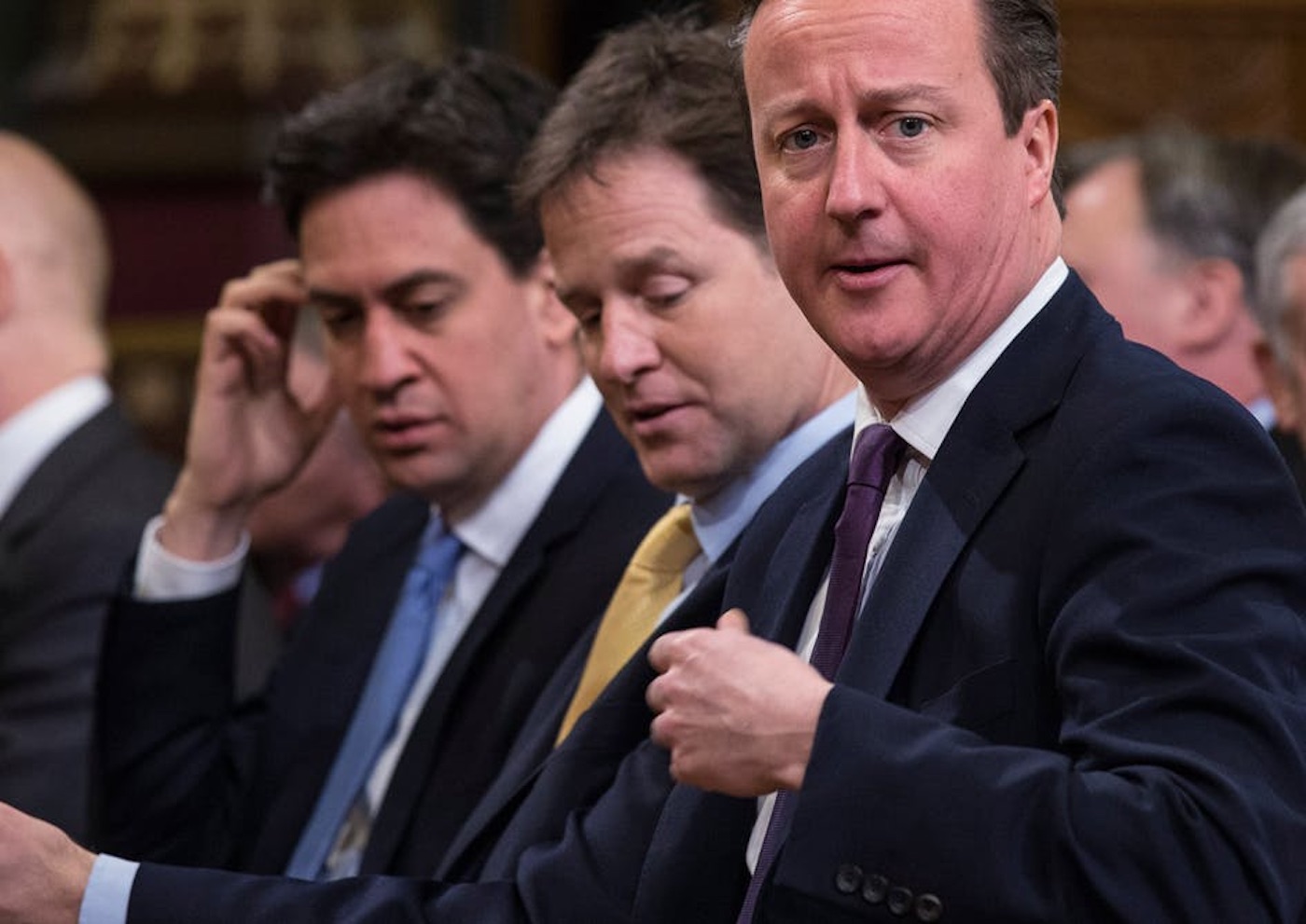 
Our political system is creaking and defensive, patronising and distant leaders seem to think that promising easy answers can fix things. In reality all they are doing is setting themselves - and politics - up to fail. Despite this, a new generation - perhaps naively - is more optimistic about our future than any other. More creative and honest - the best hope for our country lies in our current politicians moving aside before it is too late.

Politicians seem to want voters to be more like them

Look at you, there.

You - you who says you want change and then walks down to the polling booth with a smile on your face as you voted for Nigel Farage.

You - who said you didn’t like posh boys in suits and then you go and elect one in Clacton even after he’s changed political party.

Why are you being really hypocritical and doing really silly things like voting for an ex-city banker whilst also telling a pollster you think they should be taxed more?

Do you not even know what UKIP stand for?

Do you want me to tell you?

What’s wrong with you?

Why are you so fickle?

You piece of electorate.

Our politics is in trouble - and our political parties have identified who they think is to blame: voters.

And, let's be honest, it's not just our national leaders.

It's all the rage - where political activists seek to patronise each other just as much as they do the electorate.

They seem to think they’re above people – believing that knocking on the door of a random stranger gives you some sort of god given right to tell them that they’re being stupid by even considering Nigel Farage.

Our leaders say they are ‘listening’ and that they’re just like you deep down.

Oh and yes, they do care about immigration, but, but but but.

I look back now on some of the things I used to say on the ‘#labourdoorstep’ and I now cringe at the thought of being the person on the other side of the doorway.

I get the emails and read the tweets - and remember being the person stood there as someone says something perfectly legitimate about an issue in their local community and not having a clue what to say because I don’t live there. So you're left there, stood on their doorstep, having no idea who the local councillors are let alone the road round the corner she’s describing to me as if I know the local area.

She knows I know that she knows that I know that I don’t know what she means. So I just nod because it seems inauthentic and wrong to actually say “Sorry, I don’t actually live here, I’ve just been bussed in to tell you how to vote tomorrow.”

And that’s why I’m sorry, but I just can’t do it anymore.

Apparently that probably makes it my fault that we nearly lost in Heywood and Middleton.

But I tell you what - I do remember listening a lot on the doorstep. Not that the candidates nor the organisers cared about what was actually heard.

And what did people say?

Well, when they spoke about the NHS, I’m really sorry to break it to you, they were not glowing with smiles and brimming faces saying how ‘proud’ they were of our best institution.

No - long waiting times to see a local GP even in 2009, and a rude doctor who didn’t seem to care once they got there.

Their friend who had gone in and caught a superbug.

The fact they had to explain the same thing to four different people and each time got told something different.

Of course we are all grateful to have the NHS to rely on and that it exists – and yes, it has genuinely saved my life - but we're going to have to do better than sit there and use that as a political football to kick around and tell people that’s why they should vote Labour and why the Tories are evil.

We can, and have to do better than that.

Times are changing, but our politics is not

My generation has grown up with the world closer to our fingertips than ever before.

I can walk into a bank on the other side of the world and access my bank statements.

Yet, walk into an NHS hospital miles away from your home and no ones ever heard of your medical records.

I’m not even trusted with a copy of my own medical records.

I’m not treated as an adult or as a stakeholder in my own health - because a doctor is there to ‘fix’ me and therefore I should put up, or shut up.

Like when you’ve got chronic sleeping problems and are struggling just to get through the day and you're just offered sleeping tablets and anti-depressants to get rid of you.

Sexual health services taking three hours for the tests and a week for the results - when charities can do it in 15 minutes.

Don’t tell me we don’t deserve better from our NHS than that.

If only our health system worked with people to make them better.

Because we are a generation that fixes problems in front of us.

We code our way round them, we build networks of people to keep in touch with and we start our own businesses to build a better future because paid jobs don’t give us the flexibility we want - and working for someone else doesn’t give us the independence we crave.

Yet our politicians seem happy to just offer an apprenticeship for £2 an hour.

You only have to look around you and see young people craving something different from being told to do an unpaid internship to get into banking and finance to have a good life. Or being told that can't dream or amount to anything they choose.

Thousands of kids in college studying subjects they’re not really interested in - only there because they’ve been told they should do something – and never encouraged to do anything that they could if they wanted.

If only education truly empowered them.

Imagine what we could do if we worked with young kids to support them in building their own jobs for the future rather than promising them one we’re not even sure we can find them.

Yet apparently making it easier for people to start their own companies and talking about the power of the internet to change lives and our public services is the ‘preserve of the rich and the elite’.

Despite the fact that without the internet I wouldn’t even be who I am today, let alone where I am today. But that makes me some sort of ‘traitor’ because I don’t think you can write off the poverty and isolation as well as the decimation of our public services in places like Norfolk just because that’s “not where our vote is” or “where we win elections”.

Just because our poverty comes surrounded by fields and farms it doesn’t make it less working class than someone from an inner-city postcode. But then apparently we need to “get real” and I don’t understand ‘working class Labour’ like you do.

And so instead we just want to ban things.

We want to stop things.

We want to tax people.

We want to track people.

We want to tell them to start doing this and stop doing that.

We claim politics can change the world when our politicians can’t even change people’s minds.

We promise the most mind-numbing policies and pledge to change the most basic processes and yet we still fail to deliver them and then blame each other for the fact they didn’t happen.

We are the hypocrites.

And the solution that this warped reality has told itself is the answer? Yep that’s right – politicians talking about meeting ‘ordinary people just like you’ – in parks. Telling you that you should donate and join us in ‘kicking out’ David Cameron because you hate him. Even if you don’t.

I’ll say ‘effing’ because it makes me sound just like you, doesn’t it – and that’s all you want really isn’t it? You just want me to sound like you and then that’ll be it.

I could promise you anything. And I do, I will.

I’ll even say sorry if you want me to.

We’ve ended up with the gamification of the entire electoral process like some shit TV show on ITV2 called “Who loves the NHS more?”.

We all want it to stop, but if it stops you’ll just realise how messed up the whole thing is – so you just keep going.

Speech after speech, doorstep after doorstep.

So is it any wonder that people don’t find it hard at all to vote for a party that is just as messed up as this entire system itself?

Britain is creaking under the weight of its own democracy.

It badly needs renewal - but that is not going to be solved by just a new voting system or a new leader.

Our country is paralysed with fear about its future and so nervous about where to go next.

Quite frankly we are withdrawing piece by piece from the table that will decide our nations future.

And so it is no surprise to me that when my generation is so used to voting, constantly being polled, having their say, empowered to change their lives on a daily basis and constantly talking to people who are less reliant on the media, that we are more skeptical of government and politicians than any other before us.

But what is so bloody brilliant is that despite all this? My generation, perhaps naively, is more optimistic about our future than any other.

Despite being constantly let down by a political class, we believe our best days are still ahead.

We’re more creative than any generation before us.

We’re more willing to work together, share resources and get involved than any other generation before us.

We believe business can be better and we are innovative enough to make sure it is.

We believe government is not always the answer because people are more powerful than anything else, and even though we may be less trusting of each other – we still believe that together we are stronger.

We are more pragmatic and able to make sense of a confusing and ever changing world which has paralysed our political system.

We are more open about our failures and yet more passionate about changing the world around us.

We can be more honest because we’re more open to being persuaded and not to know the answers.

We are the generation finally capable of moving beyond a politics purely motivated by self-interest to help us tackle the biggest problems this country and the world faces, shirked by our elders.

We are more socially liberal than any generation before us, and we have the guts and the ability to both confront bigotry and hatred where we see it - and change peoples attitudes.

If that’s not progressive then I don’t know what is.

We are the generation that can not only just fix Britain, but can take Britain forward.

We need to be given the chance.

I just fear that when we finally wake up from this nightmare it’ll be too late.

If you think more ‘listening’ is the fix to this mess then you are badly mistaken.

They are fed up of people talking and listening and doing absolutely nothing all whilst they watch you ask them for more money to fix the problems you’ve failed to even talk about let alone act to prevent.

I think we need to talk about my generation, because I believe we have the answers.

I’m not sure anybody else is willing to really own up to the scale of the problems we face.