What is it you're looking for? 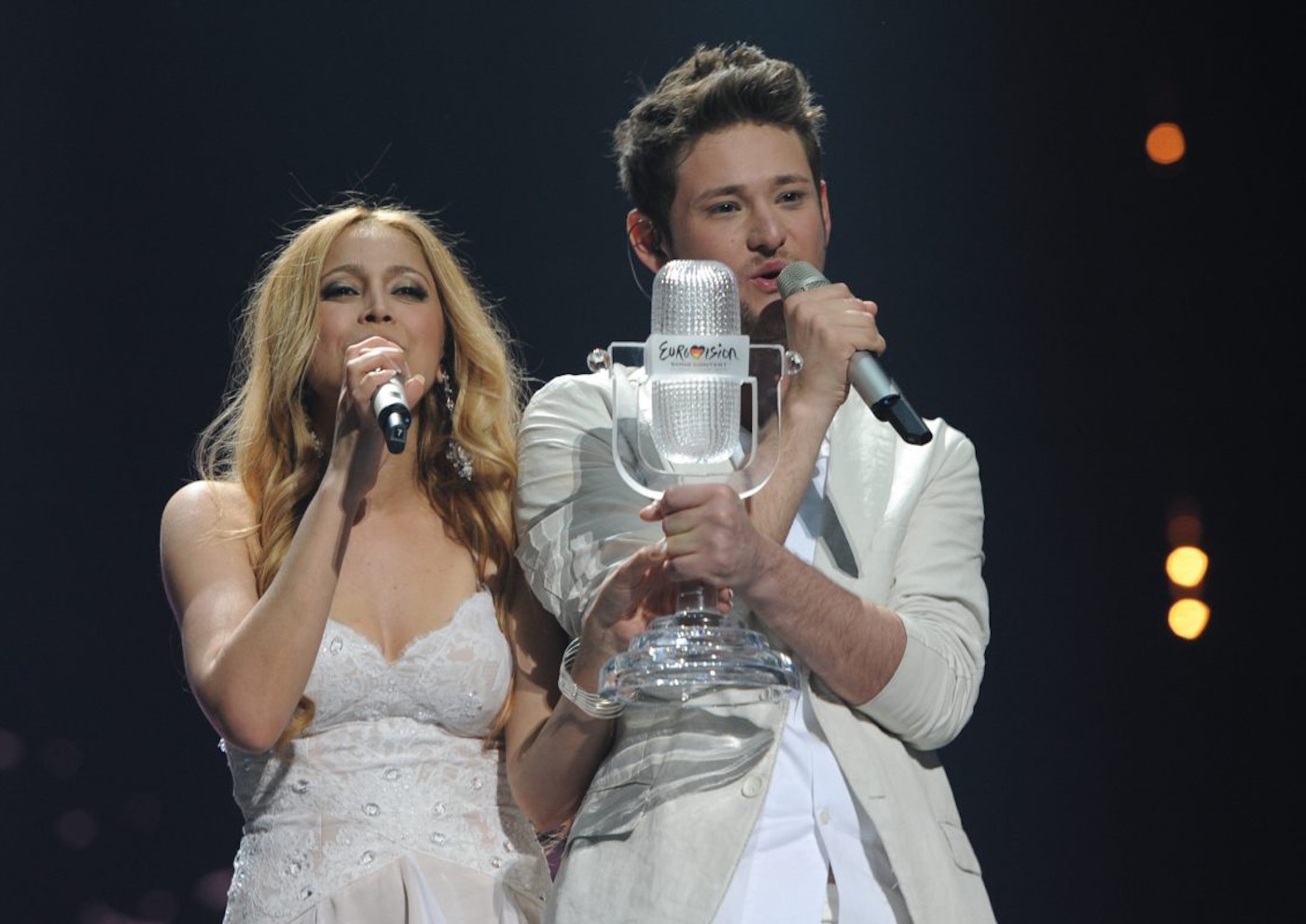 Azerbaijan's first Eurovision victory has been in the making since their debut. But there were much better songs in the line up. With Italy coming second, what on earth was going on in Dusseldorf?
Photo: Trend


Azerbaijan managed to win this years Eurovision Song Contest with a middle of the road entry that fails to have the commercial appeal of its two predecessors. Yet, it was the jury who allowed the oil-rich nation to win because it propelled Italy’s ‘Madness of Love’ within touching distance of victory. Something changed in Germany and the jury ended up shunning class, songwriting and record-sales. The EBU needs to justify its concept of the jury vote in Europe’s biggest television show as result.

This year, the Eurovision Song Contest had two winners.

Many of us had predicted it, although not quite in the way that it happened.

Before televoting took hold of the contest in Birmingham in 1998, nobody could really doubt the aim and opinion of the jury.

Ireland certainly could rustle up a strong ballad and know what its score would be - and if you pushed the boundaries too much, you would fail.

But you’d know what to expect if you came up with something modern, that was in keeping with the current music scene.

The United Kingdom regularly challenged Ireland with a more modern alternative to the standard ballad, it proved successful, but not quite successful enough.

The jury was a consistent voice of the conservative music scene.

Turning our attention to this years grand event – the winner was something of a disappointment.

After a final watch of the French rehearsal just hours before the contest began, it seemed to me that it was perhaps just a little too plain to win the votes of the televoting public.

But the bookies were certain – it was France’s contest – and they hadn’t got it wrong for a few years.

Many, including myself, thought that the juries would propel France’s Amaury Vassili into having a shot for the trophy –

‘Win the jury vote, and pick up a consistent televote from across Europe and he might just have it in the bag’.

Highlighting the possible challengers wasn’t too difficult by that time – Ireland with an impressive last minute charge, Sweden with its consistent schlager-pop, Denmark with its anthemic stadium-rock and of course, Azerbaijan.

Never to be ruled out, the Azeri entry was plain and boring but was always going to poll well with the televote – and, fair, the juries might like its simplicity and have it within the top 10.

So the fight then was between the jury’s pick, France, and the televote between Sweden, Denmark, Azerbaijan and Ireland.

The stage was set for a show down, that would likely see a different winner between the viewers at home and the juries across Europe that had already voted.

It won't be alright on the night

The French performance was sketchy to say the least.

But surely that wouldn’t matter - as the juries had already voted in the rehearsal?

Azerbaijan was nothing special.

Maybe this was a more open contest than first thought?

The room went pretty quiet for Denmark and Sweden – everyone wanted to hear.

They were ‘good’ songs.

I am discounting the ‘Jedward’ affect as it would always get 12 points from the UK.

Overlooked before the contest, it was striking and modern – and it proved very effective.

But Azerbaijan would go on to win convincingly over – Italy.

There was little that could be said until the split results of the jury and the televote were announced – but, in my mind, it was extremely clear what had happened.

The jury had pushed Italy within touching distance of victory.

And yes, when the results were announced a few weeks later, that’s exactly what had happened.

The jury was all over the place

I’ve not seen a jury vote since its introduction that was so varied, and so inconsistent compared to the televote.

Greece placed 14th with the jury but 3rd with the televote.

Our very own entry, managed to score a very respectable 166 points and come 5th with the televote, but the jury rewarded Blue just 57 points – that’s 22nd out of 25 entries.

Italy’s 251 winning points with the jury was contrasted with just 99 and an 11th place with the viewing public at home.

By contrast the top scoring songs for the public were very consistent - and in-tune with popular music tastes.

Ukraine perhaps being an exception, all of them could probably be chart-toppers across Europe, and indeed, most were already.

But what exactly were the jury doing?

Propelling Italy to a touching distance of victory was either a coded wish of the country’s return after 13 years or the jury were more out of touch than they’d ever been before.

In 2009 and 2010 they backed respectable, commercial, ballads and pushed them into 2nd place.

This time, they shunned them for a song that sounded like a b-side off a Jamie Cullum demo.

If retro was their theme, surely the United Kingdom deserved more than a 22nd placing?

‘I Can’ wasn’t the most modern attempt for sure – but it certainly was a more credible chart-scorer than Italy’s ‘Madness of Love’.

If it was about composing, surely France should have been up there? Instead they had it 14th.

If it was about popular appeal surely it was Sweden’s day?

Their votes for Austria and Slovenia were odd choices after backing Lithuania to win the first semi-final.

The jury vote was inconsistent, weighted and confusing.

It's time for something different

The EBU needs to go away and look at the jury format to prevent another year where a poor, middle of the road entry wins.

It also needs to clarify what the role of the jury is.

Is it to overcome political voting?

In which case how did Azerbaijan manage to win?

Is it about getting the ‘right’ commercial mix?

Yet, Azerbaijan clearly wasn’t the best commercial song in the pack this year - for example its attempt last year was better but only managed 9th with the jury at the time.

Or is it to reward non-commercial songwriting?

Every year the Marcel Bezençon award for composing is awarded to the best song after the competition – every year a ballad has won but on each occasion since 2009, the juries have shunned that entry.

It seems to me that this year the role of the jury is hard to defend – something changed and it robbed the contest of its closest finish since 2003.

It’s always been my belief that an international jury, separate from national voting would be more effective.

There is much to be said for a jury that can vote based on a common set of principles and values.

In the past, the jury has been consistent – both prior to 1998 and in both Moscow and Oslo.

But something changed this year.

We need to ask what exactly are the jury looking for, or we risk losing some of the best song-writers the competition has had.

Russia came last this year according to the jury – but the song was written by one of the most successful modern songwriters.

Something was up this year –

and if it was - we’d be better off without them.